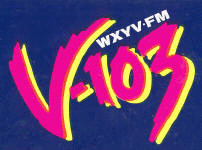 What B104 was to the CHR format in Baltimore, V103 was to the Urban format. A longtime station in the format, WXYV began to feel its age in the mid 1990’s as it was bombarded by a pair of Radio-One sisters. Rhythmic CHR “92Q” and Urban AC “Majic 95.9” cut into WXYV’s audience from both ends. Infinity, seeing the CHR format regaining popularity elsewhere, and a huge hole for the format in Baltimore brought the demise of V103 and the birth of “102.7 XYV”. However, the station would be marred with inconsistancy for the next couple of years. The station would constantly change its lean from dance to hip-hop to alternative while searching for a gain in audience. In 1998, the station changed its name to B102.7 in order to prevent a competitor from bringing back B104 and at the same time connect the two CHR’s in Baltimore’s recent history. A newfound mainstream pop lean came in 1999 as the station finally found some stability.